I’m not sure about Bruce Christie … is he a super fill-in or some sort of kinky swinger. In the first semi final Bruce fills in for Mick Fenelon and he and Steve Wright win their way through to the final. In the second semi Bruce changes partners and fills in for John Faull and with Peter Dunn also wins through to the final. This could have potentially made the final very weird … Bruce playing both sides of the net … sort of inbred like a Tasmanian country town. Fortunately John Faull is able to play so Bruce swings back to his first partner Steve … and the questionable morality of the finals is saved. 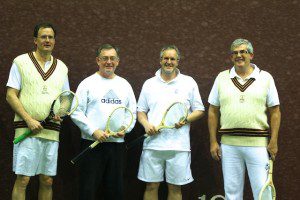 It is a good match as you would expect and Brett’s initiative of a happy hour for spectators gives it a finals atmosphere. Despite a 9 point handicap disadvantage Peter Dunn and John Faull lead most of the day with Steve Wright and his swinging partner slowly closing in. Ironically in the spirit of the AFL finals and the federal election it is a 10-10 draw when the time buzzer sounds after fifty minutes. Unlike the AFL the match is decided by a golden game. I was praying to be able to use the headline … Bruce goes down swinging … but I can’t when in the end it’s won by Steve Wright and Bruce Christie 11-10. Congratulations guys. 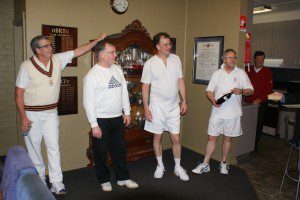 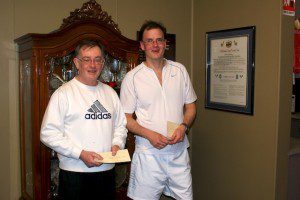