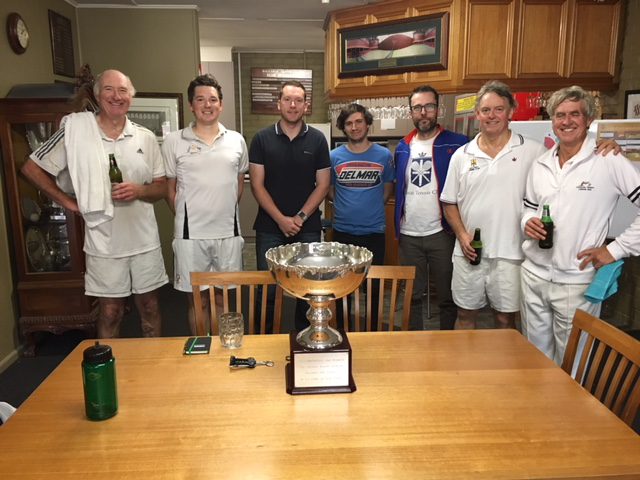 Once upon a time back in the mid 1980’s my mother used to teach Nicole Livingstone.  She went on to win an Olympic Bronze medal in backstroke in an era when her competitors looked vaguely human and not very female.  When mum was teaching her she was training many hours before and after each school day.  Interschool sports would come around and she would win every event she could possibly swim in, backstroke or not.  This led to some complaints.  You could argue that she was just too strong for this competition.  Or you could say that it was her reward for all the work she was doing above and beyond.  What is my point? I’m getting there.

This is the 11th Widmer-Bradfield pitting the best that Hobart and Ballarat can throw at each other.  Still working on Gentlemen’s Agreement rather than Actual Rules (somebody is probably still working on them and after 11 years they’ll probably be really good when they get there) we traditionally do 4 singles and 2 doubles.  We have generally contrived to match things up relatively evenly.  Odd moments from the past have included Julian Snow playing a doubles rubber for Ballarat (hey, he’s On Our Books!) and we have debated whether the concept of Actively Playing at the clubs or State Of Origin mean anything.  But this is the first time that the World’s Best Amateur Keiran Booth has made an appearance.  Let’s call him the High School Era Nicole Livingstone of this event.  Keiran means that Michael Williams has been Over Trumped and the rest of the Hobart team drop one rung down the pecking order.  The average handicap difference in our singles games was close to 10 points in Hobarts favour.

Anyway, I should talk about some tennis.  Match one on Saturday Singles Day was between Will Hoskin and Pat Dunne.  Will played beautifully for someone who hasn’t had lots of competitive tennis recently and could easily have pinched a set or two.  This was close but Pat is wily and some match toughness and awareness shone through at the crucial moments.

Match two was myself taking on Al Ramsay.  Given Al’s handicap is 11 this was, in my mind, a David v Goliath situation.  I was armed with a sling shot and Al was armed with something Way Bigger And Meaner Than I Can Stretch This Poor Analogy Too.  In an expensive week of preparations I played with Andy 4 times, had two 2 visits to the physio and one other exceptionally painful remedial massage.  I think this is a vision of The Future as I move Over The Hill.  I thought I played well, made some headway against Al’s railroad, had some minor success with mine.  The problems were that he is way more consistent on the floor and his Serving Plan B was way more effective than mine.  We had a number of close games but I won approximately a hand full.

Match three was Wayne Spring playing Graeme Bradfield.  They had a rerun of their Gentlemen’s Agreement of a few years ago to only play a best of three sets.  Wayne absolutely ambushed Graeme in this format previously and some witness accounts say that the match was over in less than 20 minutes.  Graeme appeared well prepared for anything similar this time around.  His serving contained Wayne very well and Wayne couldn’t find the right length on his serves to make Graeme volley.  As the game wore on Wayne progressively looked better but Graeme’s length game on the floor is very good and it wasn’t possible for him to mount a come back.  Another straight sets loss.

And then we come to the Evening Edition.  Keiran and Michael.  Various sporting figures over the years have had different ways to intimidate opponents.  My all time favourite would have to be Viv Richards refusing to wear a helmet in his prime and chewing gum even as Dennis Lillee was trying to kill him.  Keiran is a terrifying prospect on the court but an unassuming all round Top Bloke off the court.  He wandered in munching on celery sticks.  I think this is his way of saying “while all you Also Ran’s are drinking beer* on Saturday Evening I’m still living a life of Spartan dedication to The Cause”, he didn’t even say it out loud, I could just tell.

This was fantastic tennis to watch.  A whole other level above and beyond.  Michael was serving short side wall rail roads in an attempt to make Keiran’s returning even slightly predictable.  This was marginally successful but predictable still meant hard, fast balls very frequently directed at the Dedans.  Some of Keiran’s defensive scrambles were a highlight considering this is a foreign court.  Both players highlight reels would be prime examples of World’s Best Practice ball striking.  Michael threatened to steal a set from Keiran and delay Dinner Proceedings, but not quite.  A theme for the day had truly emerged and that theme was Almost.

Andy was good enough to arrive with the second component of this Match Report’s Subtitle.  Donuts.  I had Keiran’s portion.  Again he didn’t need to say anything, I just knew he wouldn’t be needing any.  The donuts were sweet but were also a bittersweet reminder of the Ballarat Scorecard.

Match One was Hartnell / Hoskin taking on Booth / Ramsay.  I shouldn’t need to point out that Will and I winning any games here would be an achievement.  We did an experiment with me playing up and Will back.  Keiran elected not to hit balls hard (I believe this was a Conscious Decision and not from Celery Induced Wilting of his powers) but that was relative to his standards, and he also played up at the galleries throughout.  This is not a position Keiran looked totally familiar with for obvious reasons.  Will and I accepted a few handfuls of errors that the Hobart team generously clustered together and did manage to win a few games.  Otherwise we seemed to be doing well without any significant Scoreboard Pressure.  This was a bit of a treat for me.  It’s nice to see up close and personal what this game looks like at the highest level.  Just so I can pretend.  Another straight sets lose.  The Ballarat Donut of a score line remaining intact.

Pride on the line here.  The form guide would have this as our most likely rubber to win.  Jonathan might reside in Melbourne and generally play in Melbourne but like Julian he is On The Books and apparently with the help of his Sat Nav he can find our court!   But no.  The Rats were unable to dent the supreme confidence from the Hobart end and another loss to round out the weekends tennis.

So.  Donuts for us on the scoreline but at least we get to eat them.