At last an event I‘ve got a chance in. Brett says I’m the most amateurish player he’s ever seen … so I’d just have to play a few 80+ handicappers and take the honours. Wait a second what’s Daniel Williams doing in the draw … I’d better google the word amateur quickly.

From the French it literally means “lover of” which leads to its definition as someone who pursues an interest or sport for pleasure. If you were upper class wealthy this was easier so amateur evolved to become a class term to distinguish you from someone with a paid profession in the lower classes. Ultimately as professions became where the money was the word evolved into meaning non-professional/untrained/amateurish. Semantic drift if I ever saw it … though the original meaning is still well understood from the changes to the Olympics and most sports decades ago.

None of helps me or gets rid of Daniel from the event … so I’ll bow out and leave it to some true amateurs to fight it out. 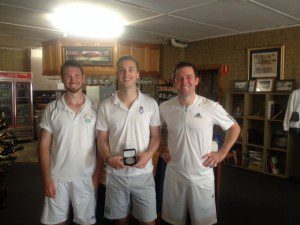