WIDMER BRADFIELD 2011 REPORT: ‘More Truth than the Facts Would Allow’, By Mark Hartnell

We the good folk of Ballarat Tennis Club have hosted the best that the Hobart tennis club could send in an attempt to reclaim the Widmer-Bradfield trophy.  You may remember this is where the best Tennis players available from both clubs take part in a Drinking Competition interrupted by some Tennis. We have not had any success against Hobart down there with their Dodgy Cheating Court they all play so well.  We were hoping to see a return to our form of 2009 which saw a count back win to The Good Guys.  We were hopeful early when one of the essential elements of a Rat win became apparent: someone missing from the Hobart Best 4.  While Pete Boyles came out of Widmer-Bradfield retirement (boo) Al Ramsay has recently had a child (yay) and could not come to play (double yay). Joining Pete form Hobart was ‘Paris’ Hilton Booth, Graeme ‘Figurehead’ Bradfield and Pat O.C.D.B.S. ‘Coach’ Dunne.  In other Selection developments I have lost my starting singles spot due to the continuing development of Junior Williams and my failure to overtake The Old Blokes.  An enormous amount of discussion prior to and during the tournament centred on the matter of handicaps and format – namely who was playing who.  As Wayne says, after 4 years of playing this thing, “we’ve nearly worked out the rules”.  Thankfully due to the fact that we are a Good Bunch of Blokes, unlike say, some other Australian clubs, we seem to work it out.  So we basically told Hobart who was playing our doubles some time before Christmas and they sorted out their combo based on who pulled up in the most sober state on the Sunday morning.  Game on.

This looked on paper a game that could go either way.  Graeme might have had some concerns for his safety but would have liked his chances of getting on a roll with his neatly weighted ground strokes and 5 set experience and potentially frustrating the hell out of Michael.  The first 2 games played took over half an hour.  Graeme took them both and got out to a 5-1 lead which did not reflect the closeness.  Sometimes you can blame yourself too much for a scoreline which has more to do with a flukey bounce here and there.  Thankfully Michael didn’t start beating himself up too badly.  It is also impressive what can happen when all seems lost and you relax to a degree and just watch the ball and hit it.  The next 12 games produced an almost unbroken sequence of balls chosen judiciously by Junior to give what I believe is called on a technical level A Right Royal Spanking.  Graeme regrouped at the start of the 3rd set and again took up a significant 4-0 lead.  Clearly however his nerves were frayed by his desperate defence of the Dedans and did not win another game.  We saw some last reminders of Michael Williams erratic forcing before he sets off for the UK for slightly-less-than-the ARTA-sanctioned-12-month-maximum-for-amatuer-players to iron out all remaining kinks in his game.  Brett is handling the odds and money for anyone who wants to predict his handicap next time the Widmer-Bradfield comes around.  I have given him a final dichotomy to ponder: Straight force / 2 moving parts  = Good; Across the Body / More Moving Parts Than Cerebellar Ataxia (Dad or Sis can explain) = Bad.  I will happily claim all credit for the improvement in his game. 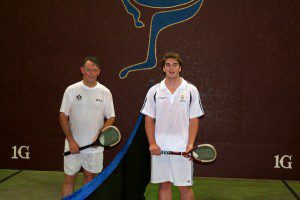 This game looked worrying to me.  Pat has the ability to play Old Man Tennis with a Young Man’s Body.  It is always good when he takes to the court because he has to stop giving other people gratuitous advice.  I never underestimate the ability of Wayne to induce poor play in his opponent but I felt that if Pat took the first set we were done for.  Wayne fought back beautifully to get to 5-5 and all bets were off…sadly one more volley needed to sail into Tambour-Grille Land and Pat closed it out.  I had to leave at this point and the last thing I suspected then occurred: Wayne took a 2-1 set lead.  My spies remaining at the court report The Coach turning into a quivering mess of near psychotic neurosis.  I wonder if Pat experienced my recurring thought process against the Silver Mongoose high side wall service: “Oh good here comes another loose one to smash…yep, into the base of the net again”.  It depresses me in a way that someone that espouses as much Male Cow Manure about tennis as Pat actually has such a good ability to think his way through a match.  He freely admits that he Won Ugly.  Wayne had a near unassailable 4-0 lead at the start of the 4th set, so close, but the 5th was all plain sailing for The Coach. 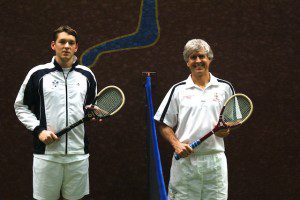 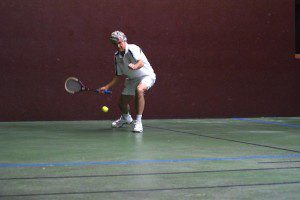 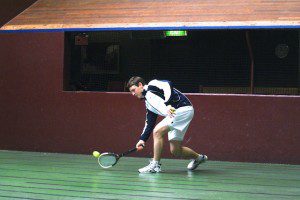 This one looked a Big Ask for The Punisher.  He played very solidly indeed.  His big mistake was picking the wrong opponent on the day and this good play went spectacularly unrewarded.  Hilton seemingly middled every ball off the back wall regardless off how tight or well cut it was.  This looked to me like a Casino Breaking Run of Random Luck or a Bloody Good Eye but Brett reliably informs me it was something much more mundane: Very Good Footwork.  Hilton was indeed moving very sharply and early into very well balanced positions on the defence and playing with venom on the offence.  I think he enjoys serving on our court compared to the crappy Penthouse roof he has to deal with in Hobart.  2-1 looking questionable for the Rat…  H. Booth d D. Parker 6/0 6/2 6/1 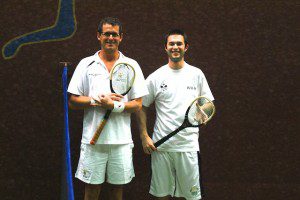 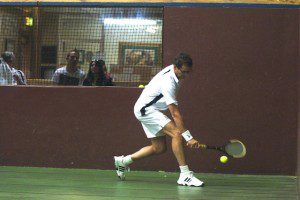 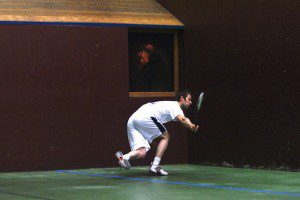 A treat for the crowd this one with the RTO telling me this is between the 9th and 10th ranked amateurs in the Land.  I believe Pete gained some confidence watching our doubles practice on the Friday night revealing that Daniel has gained no new WMD while his handicap has continued to drop.  This was perhaps misplaced confidence.  The pattern of the 1st three sets was largely the same.  Daniel served as well as I have ever seen him, almost entirely railroads, varying lengths, all tight.  Pete  hits high Two (Left) Handed Backhand volley like he mentally screams “Bansai!!” before attempting a Ballistic Flat Swat.  This is something which can vary from Awesome to A Little Bit Silly.  Both of these guys cover the court brilliantly and have great touch and some great points entertained the crowd.  Daniel looked like he was wearing Pete down at 2 sets to 1 up.  But no.

Pete went on a game breaking run from the start of the 4th set.  It didn’t look spectacular but he managed to change the pace of the game by taking balls early, at a half volley if necessary, and pushing generally flat balls back at Daniel just a fraction faster.  Almost a bit John McEnroe like.

At the start of the 5th set Daniel made an effort to change things up and looked to me like he was concentrating on cutting down on errors.  At this point I think he was unlucky.  3 serves hitting the nick in the first 4 games was unfortunate.  The Hobart folk would no doubt want me to point out that these were missed volleying opportunities, an assessment maybe in the Tough but Fair category. 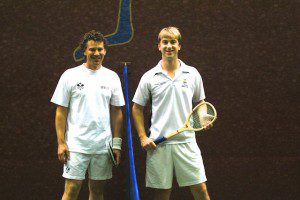 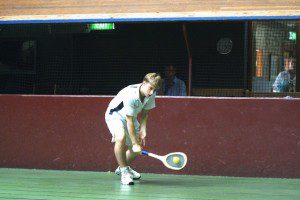 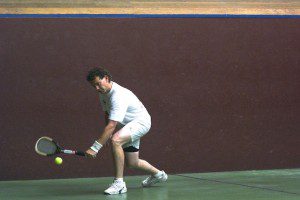 Events of the night prior failed to produce any major casualties.

I got subbed in at this point due to the fact that, as Michael puts it, he and Daniel are a “crap” doubles  combination.   Pete and Daniel continued to break even against each other with Graeme and I on Gallery Guarding  Patrol and Self Preservation Duties.  The first set was a raffle which went to Hobart.  We stuck to plan A and started to get some errors out of Graeme.  The Hobart team demonstrated they were rattled when Pete tactically threw the last game of the 3rd set to change the serve pattern.  Things started to go wrong for us in the way they seem to in doubles with a wide handicap gap.  I started to miss a few balls, putting some pressure on Daniel, causing him to go for more and miss a few himself.  Graeme started getting some tight balls back.  We had our chances again but lost another tight set.  The last set was a puzzle to me, we got the service pattern we wanted back but somehow lost our way and Hobart finished us off strongly.  Boyles/Bradfield d Williams/Hartnell 6/4 3/6 2/6 6/4 6/2

More entertainment here – with the Pressure Officially Off, Hilton and Pat went a little bit mad in a good way.  Pat began doing some random Performance Art in the middle of the court – or was it really bad calisthenics?  It was not graceful and involved not quite falling over doing star jumps.  A great contrast to the ongoing balance and poise of Hilton.  Between them there was too much power for Wayne and David who fought on well but were outplayed.  Booth/Dunne d Parker/Spring 6/2 6/3 6/1

Sadly a 5-1 loss in total but it was closer than that seems.  Three matches went to Hobart in 5 sets and all of then could have gone our way.  Not even the inspiring presence of Alan ‘Captain’ Widmer could get the close ones to go our way.  Next time they will. 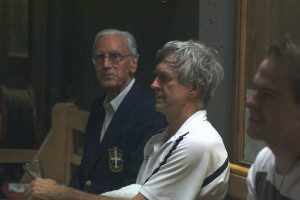