Science has established it is no longer possible to predict when Hobart is coming to play us for the Cone Cup. Biologists now believe Tasmanians and Mainlanders have evolved in different directions and can no longer communicate much less interbreed. They were scheduled to be here in April so we can’t even find out if they are early for next year or late for this one.

When we learnt they were travelling QANTAS it all became a lot clearer. What with a year of protected industrial action by three separate unions it was entirely possible that they could have set off in April and arrived in Ballarat in October. The problem became worse when Alan Joyce took the airline on strike on the day they arrived to play. How ironic … for a time it was possible they could still have been here for next year’s match.

Needless to say they didn’t risk excess baggage by bringing the Cone Cup with them. Given our history of failure it would have just wasted the baggage handlers’ time … that is if they were working. 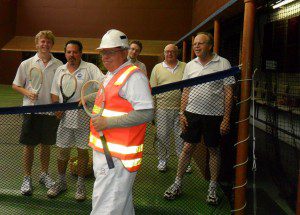 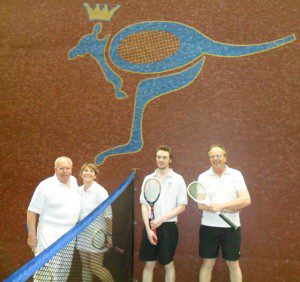 Situation normal … we were 6-3 behind after the first day. We have long since found you can’t outdrink Tasmanians … part of their evolutionary development researchers have found. However we gave it a good try with a terrific sit down meal at the Club … the sort of thing they do in Hobart when we go down there. Splendidly catered for by sponsor and member Steve Wright’s Sails Restaurant with new sponsor Montana wines … it was a nice respite from the onslaught of airline industrial conflict and the deliberations of Fair Work Australia. 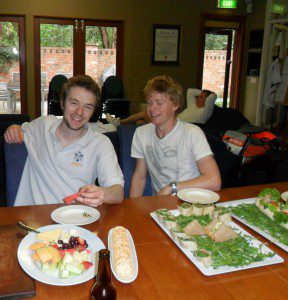 Tassie takes the second day 6-2 for an emphatic 12-5 win over the weekend … congratulations … it’s a triumph for evolution. Sav Cremona and Chris Doucas share MVP of the Series honours with their equal 5-1 win record. Best for Ballarat was John Link with a 2-1 record and Jim Stephen 1-0. The Tassie decision to leave the Cone Cup in the club room and so not strain the baggage handlers is proved to be prescient. I just hope their racquets get sent to Woop Woop on their return home … it’s our best hope for the rematch.