“The Cone’s gone pear-shaped!” … you could feel Brett’s anguish even as you admired the aptness of his geometrical metaphor. Oh dear … for the third year in a row Hobart Royal Tennis Club is a no-show for the scheduled tournament. Admittedly there have been plausible excuses … their eccentric use of the Julian Calendar is well documented and last year there was that doctor’s certificate for thermophobia. Whatever the reason our cracked BTC team of Rob Jolly, Rod Unmack, Stuart and Annie Strange were distraught and competition had to be found for them. Leave it to Brett to find a little Tasmanian in all of us … if you could spell Launceston, drank pinot or were slightly inbred … you were commandeered into an ersatz Tassie Team and the Cone was played after all … well sort of. 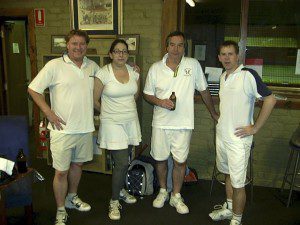 After the first day it was situation normal … BTC down 3/5. In a recreation of many a trip to Hobart the BTC Team then spends all of the evening drinking while most of the opposition goes to bed … we may be slow learners but at least we are not sober ones.

So the Ersatz Tassie team beats BTC 9/7. Even when they don’t turn up we still lose to them. There must be a lesson in this … but damned if I can see what it is. Anyway thanks to everyone who became a Tasmanian for a day and saved the weekend. At the moment we are not sure if a real Tassie team will ever turn up to play a real Cone Cup … I just hope we haven’t over-trained if they do.