Brett’s given up any pretence of trying to organise this event across the year. He’d rather tackle the European debt crisis or understand carbon pricing, than try week after week, to find a time that four players can agree on. So he just got the organising pain all over on one weekend and good on him too. At least for once he got it played in the right year … which I hope will leave him a bit of time to sort out Greek and Italian bond yields. 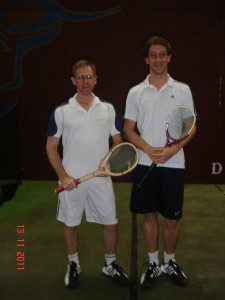 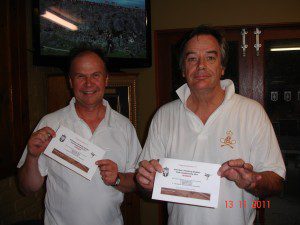 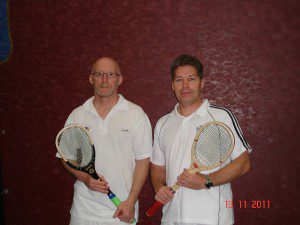 Rob Jolly has dicky hips, dodgy knees, a dicey back, his right humerus detached from the scapula and he’s not getting any younger … and that’s before he spent the weekend on court in the Doubles. No wonder he needed a doctor as a partner; his whole skeletal frame could have dislocated at any moment. In fact the only bit of him working properly was his right wrist but that was all he needed … apart from Greg Henderson that is. In a group that had the unlikely outcome of the three top pairs having the same score, they win on a count back. Fuelled by anti-inflammatory drugs Rob and Greg take out the finals in close matches with Rod & Ben and Bill & Jon and are crowned worthy Club Champions. Well done … a triumph for the right wrist and medical science.