Well, one of BTC’s most popular and intriguing events – the BTC Survivor Series, came to it’s final conclusion recently (albeit a little late) when Mark Hartnell and Wayne Spring battled it out for the title of BTC Survivor Series tournament winner. After 12 months of matches, it was Wayne that came out victorious in the end – beating Mark 6/0 6/1 6/3. 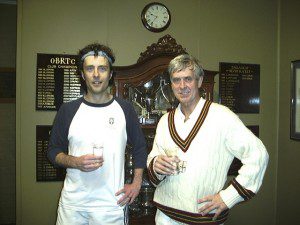 BTC Survivor Series Champion, Ian Chambers took out the main title of the event – winning four rounds from his initial starting point in the draw on a games count-back from Robert Montgomery. Well done to all those that participated in the event – the 2010 event is soon to commence!!!