Last weekend my wife conned me into going to the Regent to see Eclipse. She told me it was a documentary about astronomy … but it turned out to be the third part of the Twilight Series … I certainly hope it wasn’t a documentary. I became suspicious when I was the only male in the audience … a bit like when she took me to Menopause the Musical. Then as I hid … and as the plot, as such, was revealed … my mind wandered. Strange that Jacob was a werewolf and had a tattoo. Strange that Edward was a vampire who only drank the blood of livestock … was that evolution or de-evolution? Stranger still that Bella couldn’t choose between marrying a rich, handsome vampire … or a part-time wild animal that licks its own nether regions … strange and stranger indeed.

Strange and Stranger … SAS … after years of worrying what it stood for, I had it at last … and all because of Twilight. I’d never asked Stuart or Annie Strange because I thought it might stand for Special Air Services. Members keep their identities secret so I had assumed they couldn’t tell me or even worse. But it’s Strange and Stranger just like Edward Cullen the vampire and Bella Swan the spunky heroine … cool. 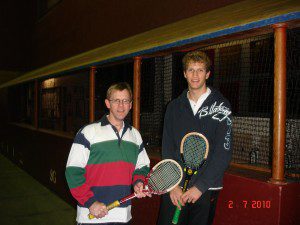 Friday night Sam breaks his racquet and still wins all his matches in his section. You’d expect caring souls like Tim and Rod to comfort Ian Chambers after he loses from 7-5 up against Sam … but they beat him up as well … Ian is traumatised. In section B Jane Bradfield is almost traumatised as she drives all the way from Romsey to find that everyone but Rohan has pulled out at the last minute. David Ward kindly agrees to help out and Jane’s sanity is saved. In section C Tim Lamont plays in his first tournament and does well with a win against Alastair but the wily Jon Dugdale is undefeatable. More trauma in the final group when Greg Rowe breaks down leaving a trio to compete. Poor old Rob Jolly with that dicky hip now has to be on court most of the time … and against madmen like Bruce and Bill. He wins but I bet he feels like Ben Cousins after a few sleeping pills the next morning.

Well won Sam, Rohan, Jon and Rob and thanks to the Stranges for their sponsorship and the revelations about their name. 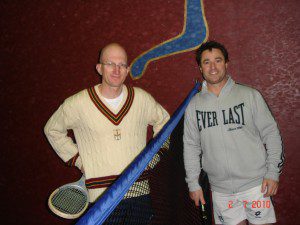