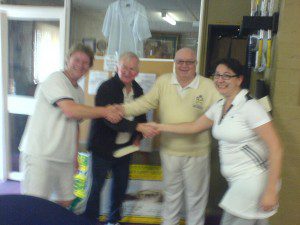 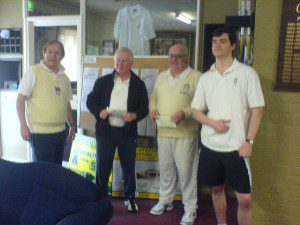 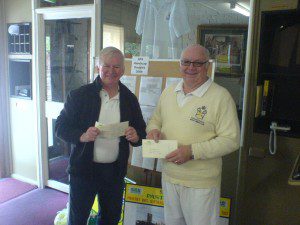 SPS or Stephen Pasture Seeds is the world of Jim and Irene Stephen … stalwarts of the Club and sponsors of this event since 1989. It’s odd because you’d think they should be sponsoring lawn tennis not royal tennis. Jim explained to me … most of the club members are seedy, gone to seed or out to pasture … he said in my case all of the above. Whatever the reason we’re grateful … that’s a lot of prizes Jim and Irene have given out over the last 20 years.

Group A
Jon & Alison Dugdale 21 games win from Sam Clarke/Sam McDonald 17 games and Patrick Sunter/Cathy Faull 17 games
In line with Club Policy on Couples and Work Cover requirements, mandatory marriage counselling was on standby for the Dugdales playing together … but there’s nothing like a win to foster marital harmony. Life was not so easy for the lads who have to put up with the obvious ‘two-sam’ pun all day.

Group B
Jim Stephen/Ian Dowman 23 games win from Stuart & Annie Strange 19 games and Tony & Charlie Cree 13 games
Jim gleefully wins a prize in his own tournament despite the handicap of his elderly partner. The marriage guidance counsellor was alerted that the the Stranges were playing together but Annie settles Stu down and they almost take it out. Regrettably Tony plays with his ancient warped excuse for a racquet … his son Charlie tells me he is terrified it will be left to him in the will.

Group C
Tom Parker/James O’Grady 24 games win from Will & Elle Hoskin 14 games and Ewan Barker/Robert Lagerberg 10 games
An ironic grouping … two university academics, Ewan and Robert, playing four secondary students. Ewan notes that the sum of the student handicaps is equal to a tenth the square of the academic’s handicap. He ponders the mathematical beauty of this observation … until he sees it translates to owe 40/receive 30 against an in-form Tom and James. Ouch … now that’s a difficult equation to solve.

Group D
Bruce Christie/Greg Henderson 22 games win from Rob Jolly/Bill Hutcheson 17 games and Mick Fenelon/David Bruce 15 games
A feral group …all hard hitting, lowish handicap madmen. Brett wisely locks the doors to keep out innocent women and children and waits for a knock from the winners. Scavengers gather to feast on the expected carnage. Fortunately half the combatants are medicos so they patch each other up … then they knock and Greg & Bruce emerge as the alpha prime males of the species.