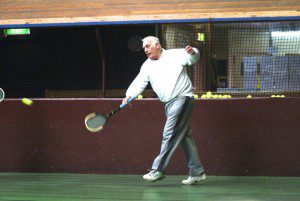 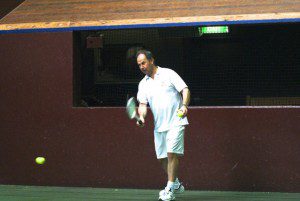 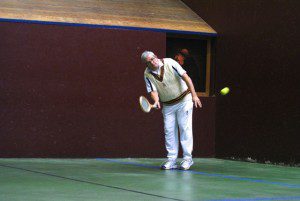 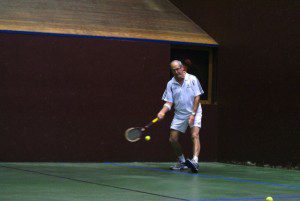 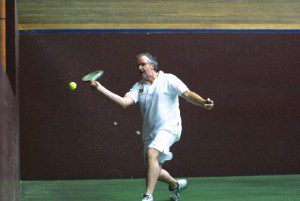 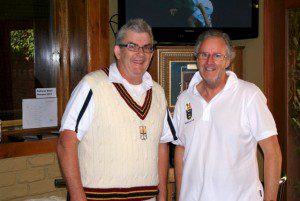 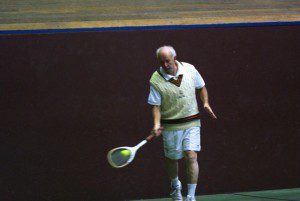 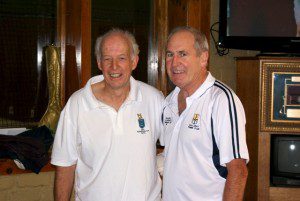 I thought I’d already played the 2010 doubles in February 2011 but now Brett tells me I had to play in another 2010 doubles event in May 2011. I had praised him as a master of time and space for only being a year late … but had he become a dyslexic Time Lord. Well it seems that I played in the Open Handicap Doubles then but now I was playing in the Men’s Handicap Doubles. Thank god we only have two sexes because this could go on all year.

The low handicap Group A had to put up with the mayhem of Stu Strange and Brett McFarlane up on some dangerous looking crane thing … cleaning the court’s gutters, with extreme prejudice, using an angle grinder. At the same time Bruce Christie and Peter Dunn, also with extreme prejudice, were modifying the tiles in the men’s change room using jackhammers. It turned out that it didn’t matter since with injuries, prior engagements and stuff, the third placed team in the group played the finals. It was nice to see some new faces … playing in Group B was Mark Matthews, a friend of Alistair Reed and in Group C Ben Jolly teamed up with dad Rob.

Good gracious me … the Cree father and son combination win their first competition. Bookmakers had Tony Cree at 10000-1 on ever appearing on any honour board whatsoever … given his eccentric choice of equipment apart from anything else. Little did they know that he’d traded in his warped, Henry VIII autographed racquet for something made this century … with strings and other advances. He had also significantly improved his game by regularly playing with son Charlie … and using the “yours” strategy as often as possible. Anyway every member should have their name on an honour board and this was long overdue … just wish I’d had the nerve to bet $1 on them.