Well after a gruelling campaign (and running 4 months late!), BTC’s Masters Handicap Singles for 2011 finally drew to a close this week when Club members Andrew Pipkorn and Jon Watson battled it out in the final. 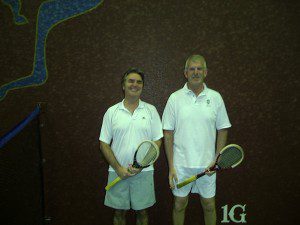 Both players have been in fine form of recent months and were worthy combatants for the final. After two tense sets, it was Jon Watson that came up trumps – winning the match 6/4 6/2 and proving to the Club professional at least that Jon should never see handicap 56 again!!! Congratulations Jon on the win, Andrew on runners up and to everyone that participated in the event. Get set for next years event.