Bruce and I were impressed by a couple of slugfest rally’s with the ball sent back and forwards at a great rate of knots, all from solid volleys. We could also see how frustrating many points were for both sides, players achieving excellent returns to get out of a tight spots, to then lose the point with a miss-hit of a very basic return … (we all know it well right?)  The 5th game was very similar to the 3rd, with quite a number of deuces, and Jo & Jenny again winning the game in the end. Unfortunately Wendy & Stephanie weren’t able to take the next game to level, and lost the next to be trailing 5 games to 2.

Jo and Jenny were too strong at the end, winning the next game, to take out the set and match – 6 / 1, 6 / 3. Congratulations Jo & Jenny, good to see you celebrate your win in the only manner you know how … a nice bottle of chardonnay J 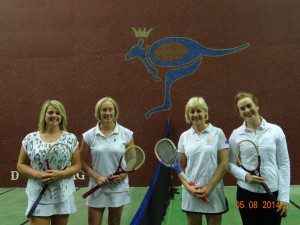 A great match where the big win, really didn’t reflect the closeness of the match …. well played girls !! 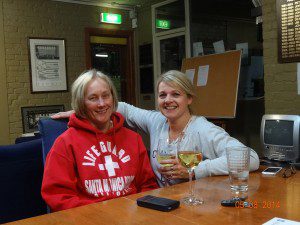