Gisborne Power Products is Club member Andrew Hall’s business. Up there he sells mega-manly power products like Stihl and John Deere … essential toys for all our sheds. The Victorian election was also on the same weekend and some cruel members pointed out the obvious irony … we were sponsored by power tools on a weekend when we were voting tools into power. Never mind the irony rubbish … with a minute ALP majority, Ballarat East will now be the most marginal electorate in the state at the next election … so let the pork barrelling begin … preferably immediately. They could start by renovating the men’s change room … that should be worth a vote or two. Fortunately Andrew’s Gisborne electorate is almost as close … he says he’s also ready for pork barrelling especially if it involves power products. 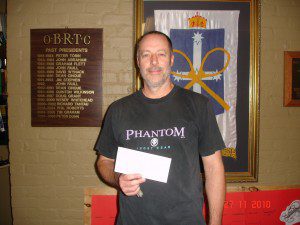 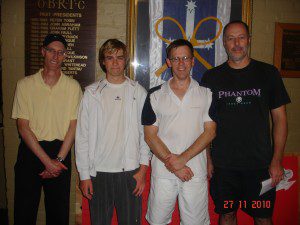 What good support for the last round robin of the year. There were lots of new members playing too and most did pretty well. In the first group John Zulic injures a calf but hangs on to win from Alistair Reed. Group B sees new, Melbourne based, Greg Reid win his first tournament using his first-up handicap to advantage … enjoy it Brett says, you will be in the 30’s in a flash. In Group C junior Elliot Woolstenholme wins from senior John Link. Newcomer Paul Sproules, however, wants to have a chat to Brett about his first-up handicap. In the final group Rob Jolly conquers all though another new member Ben Winter took him to the wire. Well done winners and thanks Andrew Hall for your sponsorship.