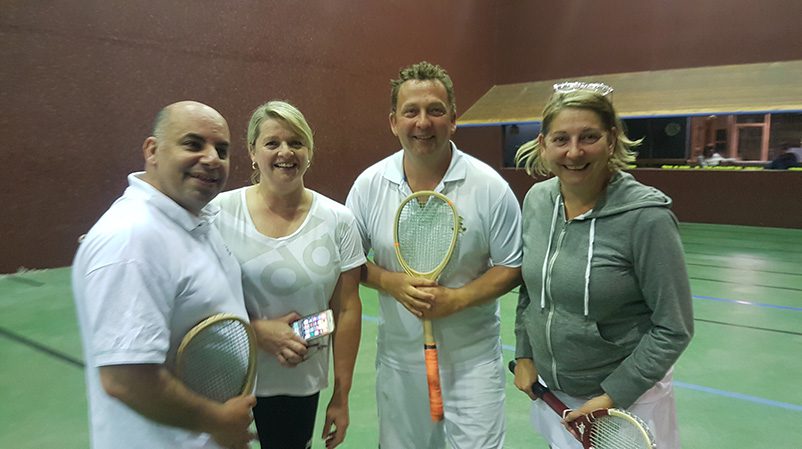 in Festival of Tennis, Tennis November 13, 2018 2353 0 1
Wanderers pulled off a remarkable victory to win the inaugural Festival of Tennis at BTC last weekend.
The handicap doubles event featured teams from MCC RTS, Hobart RTC, Wanderers as well as host BTC.
The final scores were Wanderers 10, BTC 9, MCC 7 and gallant Hobart somewhat less.
Played over three days the event featured each of the four teams playing 15 matches (first to 8 games on Friday and Saturday and first to 6 games on Sunday) with 18 players competing.
After Friday night the scores were heavily in favour of BTC when they led 5 wins, Hobart were on the board, Wanderers drew a blank and MCC did not make the evening due to Intro Night in Richmond and other duties elsewhere.
David Hay was the standout player for the evening with startling good form from Stuart Strange and Jo Edwards.  Sav Cremona was remarkable, Baker patchy and Jolly unremarkable.
Saturday saw a turnaround in some fortunes with uber pairing of Ian Bull and Peter Dunn, for MCC, misfiring, a strong showing by Cora Trevarthen to support Jo E and Sav for Hobart, and an advance by both Wanderers and MCC who won four matches each to get back in the hunt. McAllen and Woods and Greg Reid boosted the MCC.  While Cremona was getting even better, the Edwards knee was flagging.  Notwithstanding, the standout player was Greg Reid for the day.
At the end of the second day BTC was still out in front with 6 wins followed neck and neck by MCC and Wanderers on 4 wins each and Hobart recording 2 wins by now.
Supper had been served on Friday night but despite its familiar comfort food it did not provoke a late night: seemingly a mutual consensual attitude to saving oneself for the remainder of the weekend.
The dinner feast on Saturday was another affair altogether.  Inspired by North Asia, the repast of four courses featured elements from Japan, China, Korea and The Bund in Shanghai.
The evening’s down fall for most of the dozen diners, beyond the usual suspects of beer and Bests, was the untimely idea of sake toasts.
And so to a shaky start for some on Sunday.
Bright eyed Chris Nobes stepped up and demolished all in front of him, Greg Reid struggled to overcome his handicap, Chambers and Unmack stepped in for the hospitalised Wendy Whitehead and SS (some sort of unwelcome record, but glad to report both recovering well), Sav got better still, Jo E kept form despite that knee, and incredibly 5 matches went to 5-all, deuce advantage all.
Bragging rights in the Baker household goes to young Mitch (who partnered with Ian Chambers) beat his father Nathan (and Robin McAllen) when dad Nathan plopped one into the net on the 6th match ball.   And still managed a smile: what a guy.
Tough-talking Chambo missed being crowned the king of the penthouse in this match as Nathan stole that unfortunate accolade, but it was a close run thing.  It turned the whole weekend with BTC missing a chance, in this 5-6 closest of all losses, to at least secure a share of the weekend winner’s spoils.  It was then left to Nobes and Jolly to secure the Wanderer win at last turn.
Great to have the event graced by Sav Cremona down from Sydney to play for Hobart, Ian Bull, Tim Raw, The Robins, Greg Reid and Chris Nobes up from Melbourne, Peter Dunn getting back into the swing of action, Chambo, Rod Unmack and Mitch Baker stepping in at short notice for the injured soldiers, Wendy for dropping by to say hello and mark a few matches, Andrew Reeves – he of dodgy knee – and Graeme Fowler dropping by and, of course, Tanya Baker whose support over three days was torn on Sunday between son and hubby opposed across the net for the first time in combat!
The Festival of Tennis has launched with a bang.  Don’t miss it next year for a new batch of spills and thrills.

Sav Cremona on the forehand 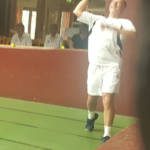 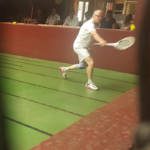 Chris Nobes defends on the backhand at FoT 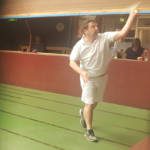 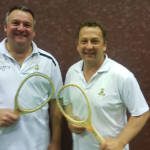 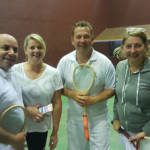 hree for Hobart and Local Wanderer Nathan at Festival of Tennis