Mark Hartnell here, reporting from the frontline at the 2010 Eureka Cup.  This is where two quite well matched ‘President’s Selections’ from Ballarat and Melbourne faced off in a handicap format.  Singles games of first to six mixed with doubles sets to eight meant the winners were likely to be the fast starters.  In case you haven’t read any of my previous tennis accounts and are looking for something fair and reasonable please look away now.

It has struck me all of a sudden that within all Real Tennis Players there is a Good and Bad Player.  Saintly side by side with Evil if you will.  Here are some thoughts about both aspects of the Ballarat Eureka players on the day.  I didn’t get to see the first Paul Williams singles match but clearly Good Paul showed up.  This is the Paul that only hits the ball as hard as it needs to be hit, that goes about his business in a placid gentlemanly way, hits a decent backhand volley and tight railroad.  Later in the day we saw some Bad Paul: swinging his head off, smacking the Grille as an opponent went to serve, groaning with pain with every railroad serve threatening to rip his shoulder capsule apart and unable to buy a backhand volley.

Evil Dean Cinque is the one who leans against the dedans ledge in the middle of key points and has tennis shoes made from concrete.  Good Dean, who appears consistently when games get close, chases down everything when the heat is on, thinks very quickly on his feet and fired up Stuart with some quirky and random humour. 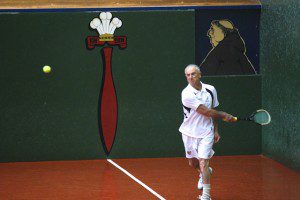 Sadly I believe we only got to see Good Rod Unmack for the odd point here and there.  This Rod demonstrates solid shots in all areas of the game and his serve is improving.  Evil Rod clearly has a problem with what HG and Roy would call “over-arousal”.  Rod seems to have the capacity to play EVERY point like his mortgage is riding on it.  This level of intensity cannot be maintained without consequences to his mental health.  I believe Dean and Rod need to get together and negotiate an exchange of intensity.  Something that involves putting a rocket up Dean for the FIRST half of matches and Douses the Flames that are Burning Rod from Within.   And maybe paraphrasing some wise words into a Tennis context:  “the last point is history, the next point is in the future and the current point is a gift” – (Especially if it’s a hazard chase. Ed) 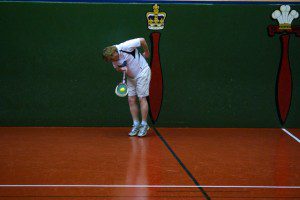 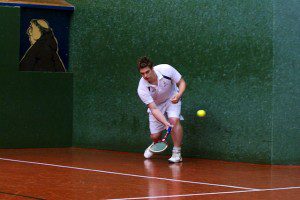 Stuart dominated some long rests in his doubles games whereas his Evil side would not have been steady enough.  His new look Succinct Bunt has replaced the traditional ‘get-out-of-the-way’ Smash Volley. Michael obviously felt confident that his opponents had enough skill that he wouldn’t kill them with a well-placed missile between the eyes.  (Perhaps misguided confidence.  Ed) He kept up a consistent forcing power for the whole day when his Evil self might have become conflicted and started hitting dodgy three quarter pace forces out of the confines of the court. Michael demolished RMTC President Owen Guest.  Owen was still looking for the serve that would stop Michael from trying to kill him when the game was over.

Peter Dunn has the simplest Good and Evil dichotomy to unravel.  The Good Pete is the one that greets  balls belted at his forehand volley with a resounding PING from the epicentre of the strings.  The Evil One treats slow moving trash like unassembled Ikea furniture with no instruction manual. 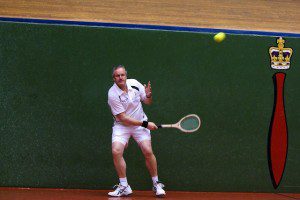 Andrew Pipkorn is bigger and scarier than me so he doesn’t have an evil side for the purposes of this report.  Seeing Andrew and Stuart armed with their handicaps belting the crap out of Philip Barker and Rob ‘Fred’ Kininmonth was very satisfying from a Ballarat perspective and had us look like resurgent winners. 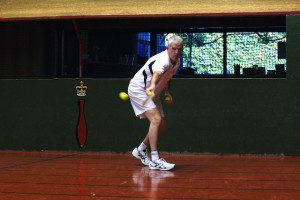 I, of course, also don’t have an evil side.  The fact that I started the day insisting on trying to be steadier than a player 10 handicap points steadier than me was just a sound tactic which didn’t pay off. 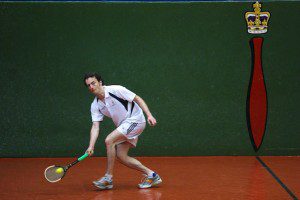 Even with all the Evil Baggage we took down to Melbourne we narrowly lost 7 rubbers to 6.  Next time, with some attention to the above, we will be avenged. 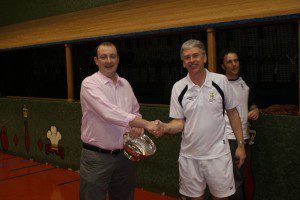 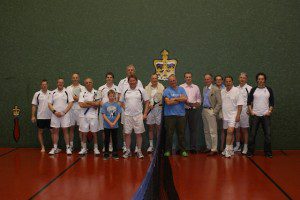