A quick tale of the Doubles Pennant finals matches …

Mick and I decided we teamed up pretty well, and after coming 2nd in the previous doubles pennant competition, we were pretty keen to avenge our Grand Final loss to Terry McDonough and Rohan Bryan.

After about 6 months of Round Robin matches, Mick and I were very pleased – ending up top of the ladder on 32pts, followed by David Hay & Nathan Baker 2nd on 30pts, Ben Faull & Liam Stringer 3rd on 30pts, and Terry McDonough & Rohan Bryan 4th on 28pts.

Checking the results, I was a little surprised as we may have ended up 1st, but that was with 16 bonus pts, while David & Nathan were 2nd with only 12 bonus pts, they’d actually won one more game than us …. Hmmmm.

I do take my hat off to Nathan, he obviously takes the game very seriously – it was on the night of the 30th Anniversary dinner at Craig’s Royal Hotel – Nathan started the sledging, pretty early I thought, but as he was sitting on the Stuart Strange and Rob Jolly table that night, I wasn’t completely surprised.  I’m not sure if Nathan remembers exactly what he said to me about my style of play or what I wore, or anything else from that night to be honest, and his sledging nearly went before the match review committee, but I was happy for the charge to be dropped as his apology (which he also won’t remember giving) was accepted on the night.

So the semi-final night Wed 25th July  was set – Team 1 vs Team 2, Team 3 vs 4.  Our match against David & Nathan was first – a well fought out match, with silly errors on our part and good play by David & Nathan securing them the win 12 games to 10.  Ben & Liam against Terry & Rohan was another tight match to begin with 5 games all, but Ben & Liam then hit some fine form taking the match comfortably 12 games to 6 in the end.

A week later Mick and I (loser of 1 v 2) played Ben & Liam (winner of 3 v 4).  A most intense match, with neither team playing many forces, both simply trying hard to keep the ball in play and not make silly mistakes – some greats rests were had.  The match got to 3 games all when Mick and I were outplayed to be losing 5 games to 3, before we reversed the match, first recovering to 5 games all, then taking a lead 7 games to 5, with 2 more games each won, that saw us end up victorious 9 games to 7.

So the scene was set, Wed 9th July was the Grand Final night with Mick and I in a replay of the semi-final match against David & Nathan.  Mick and I believed that if we played like we did during the season to get to the finals, reducing the silly errors and delivering good serves that we were in with a good chance.  David & Nathan obviously had other ideas.  A little bit of luck was had by both teams, but David & Nathan sure brought a solid game to the court that night, with many good shots played by us that we thought were winners, being returned with interest.  Many thanks to Quinton for marking the match for us, it could have gone either way, with the first 5 games going to advantage all, but as David & Nathan won 4 of them, that made it difficult for us. We were soundly beaten with the best team definitely winning on the night in straight sets 6/3, 6/2 …. Obviously more lessons needed from Brett. 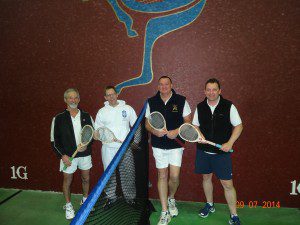 Congratulations to David and Nathan, and thanks to all other players …. watch out for the two lefties next season.