Ballarat Tennis Club retained the Cone Cup over the weekend in a series of well contested doubles matches against Hobart Real Tennis Club.

On home turf, Ballarat won 11 matches to 8 – winning both Saturday’s and Sunday’s play after a slow start. The Saturday afternoon transformation of results came above as the “young” legs of Matt Dunn and Julian Sunter proved to be a deciding factor against a mature Hobart team.

Highlight of the day was the back to back wins for the husband and wife doubles team of Annie and Stuart Strange, capping of the days play with wins against Charles Kemp who featured with partners Sav Cremona and Hamish Oates.

Hamish however, was to turn the tables the next day leading 3 fine wins for Hobart – but it was not enough to get the Tasmanians across the line.

Another Ballarat husband and wife team of Nathan and Tanya Baker also notched up a win on Sunday, and it was good to see Eryl Raymond back on court for Hobart after a substancial hiatus.

In total, 17 players toook to the court for Ballarat in a strong showing for the club. Hobart players had a busier time with the 19 matches shared between 7 players inluding stalwarts Paul Dunne and Stephen Pinkus, jioned by Hobart members via Sydney – Hamish Oates and Sav Cremona. The courtless ones both continued to shine to confound all notion of form. if they were horses we’d swab them. 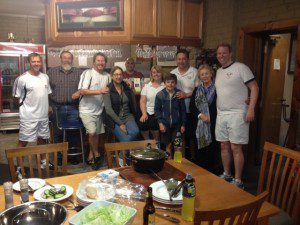 The challenge for Ballarat now is to wrest the Bartlett Cup from Hobart TC mid year in Tasmania in the anual return event. This has been a largly unproductive activity for the Victorians for nearly a decade. That is another mountain to climb altogether and we may need some tips from our Nepalese member, Doug Grant about scaling Everest, K2 and the rest.