I bet you didn’t know that the foundation of the Melbourne Cricket Club and the first European settlement of Ballarat happened in exactly the same year 1838. Of course you didn’t … and I bet you also didn’t know that the current membership of the MCC is about 100,000 … pretty much the same as the population of Ballarat. However that’s about all we have in common. For one thing, unlike Ballarat, the MCC has a waiting list of over 200,000, roughly the population of Geelong. If you put your name down fifteen years ago you will be getting near the top now but only for restricted membership … it’s maybe another ten till full membership. What a crazy city Melbourne is. If you put your name down for membership at BTC in the afternoon you’ll be a member by dinner time … and by then Brett will have phoned you at least twice to arrange games for the next morning.

Anyway they might have a waiting list the size of the second largest city in Victoria and a sports ground big enough to seat all of Ballarat and then a few … but they don’t have their own royal tennis court. So every year they round up a team and send them up here for a bit of fun. Wayne Spring has dual loyalties but MCC has deep pockets and outbids BTC for his services. Tennis newcomer Greg Reid shows he will be handy for MCC in the future. Rob Jolly attempts to play every match, Greg Henderson is undefeated in both his games and Mike Garnett hobbles off with a bung leg. In the end BTC beats MCC four matches to two … a triumph for the short waiting list over the long one. 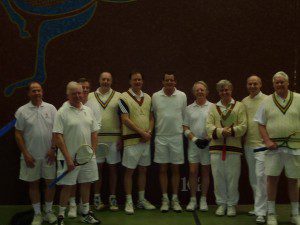