Well, BTC’s Summer Series Pennant has been played and won – in what was a most competitive season. A total of 9 teams, competed over the January period – in what is proving to be a most popular format for those members hanging around Ballarat during the January holidays. 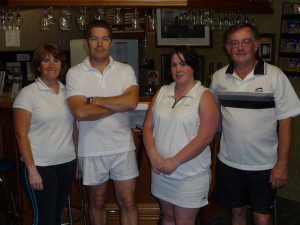 Four teams made it through their respective round robin groups to Semi Final Stage. In semi final 1, Steve Wright and Elle Hoskin proved too strong on the day for Jeremy Johnson and David Ward – winning 4/1.

Semi Final 2 was played between the top markers of the event Mark Hartnell & Ewan Barker – who took on husband and wife duo, Jon and Alison Dugdale.The handicaps proved to be the major hurdle for the night for Mark and Ewan – who went down 5/0.

The Grand Final proved to be a torid affair…but it was Jon & Alison Dugdale that came out on top in the end – winning 3/2. Congratulations go to our 2010 winners…but well done to everyone that decided to have a go.

The task will now be up to Jon and Alison to see if they can now defend their title against the masses in next years event!