BTC’s Premier Series Pennant drew to a close last week after a full season of very closely fought matches. Five teams consisting of Ballarat’s top players fought it out over the course of the season with the teams of Brett McFarlane & Will Hoskin v Mark Hartnell & Rob Jolly making it through and battling it out in the Grand Final. 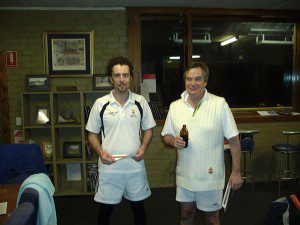 After losing to Rob Jolly earlier in the year, Will Hoskin was keen to make amends in the final and started strongly taking the first set 6/3. The second set was a tighter affair, with a terrific standard of play on offer for those that came along to watch. A tense and very close second set saw Will once again take out the set and finally the match winning 6/3 6/5.

The second match of the night was another close affair with Mark Hartnell getting through in the end – winning 3/6 6/4 6/4 and taking the night to one match all!

The deciding doubles match however was not quite so close – with a well gelled team of Hartnell & Jolly taking victory 9/1 and becoming BTC’s first Premier Series Champions! Congratulations to them both on a well deserved victory. 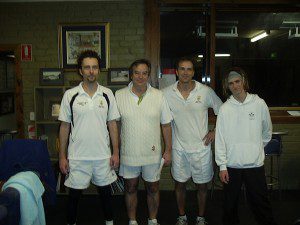