Just like Malaysian Air MH370 the 2013 BTC Men’s Handicap Doubles vanished without a trace in 2013. Unlike the unfortunate Boeing which lies somewhere in 75000 square kilometres of the Indian Ocean we know exactly where to find our problem. It is in 9 square metres to the left as you enter the clubhouse. In fairness to Brett he has publically declared that organising knockout doubles involving all the men in the club in one year is officially impossible. He cites McFarlane’s Equation … the multiple of conflicted diaries x missed phone calls x feeble excuses x 4 club members = infinity. He said … it would be quicker and preferable to snorkel around 75000 square kilometres of ocean listening for pings with a stethoscope than to organise it. So just as in previous years we have the event as a round robin as soon as possible in the new year. We get good participation, Brett stays sane and we have the chance for a few jokes about his ability to read a diary. 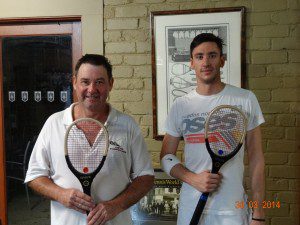 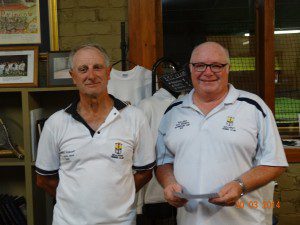 There was great participation and lots of close groups as you would expect with handicap play. Nice to see Mike Garnett up from Melbourne … did you know he donated that swish new coffee machine to the Club? In Group D hot tournament favourites Dowman & Hall win their section but are afraid to face their wives to explain why they can’t cook dinner. This allows runner-uppers Matthew Dunn and Doug Grant to play through and eventually win the finals in a very tight match from Jim Stephen and Dean Cinque. Well done.