I marked at 7pm, Monday 22nd June, the date/time of the Grand-Final for the Individual Pennant Thursday Night competition. (Playing the Thursday night comp on a Monday night – only 3 days out, not years, so we’ll accept that one Brett).

The match was between Tanya Baker & Jeremy Johnston, and with a match handicap of Rec 30 / Owe Half 30 favouring Tanya, I certainly wondered how the match was going to play out. 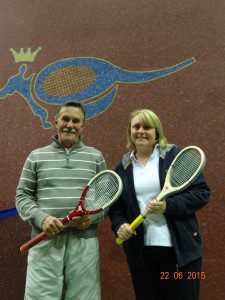 The answer to how the match was going to run, was answered pretty quickly with Tanya jumping quickly to a 4 games to 0 lead. I could see the puzzled look on Jeremy’s face, as Tanya was returning many balls you’d only expect from a lower handicap player, which I’m sure Jeremy was thinking were certain winners. It took a little while for Jeremy to get into rhythm and work out what serves troubled Tanya, and he won his first game, now 1/4. Play proceeded with Tanya winning the next game 5/1, Jeremy the next 2/5, but Tanya stayed strong, and made use of the dedans to win the next game and claim the first set 6/2.

I’m sure Jeremy was pleased to begin the 2nd set with the serve, but after 8 good games of tennis, the score was tied at 4 games all. Jeremy steadied though and won the next tight game – it did include a great return by Tanya to achieve a Better than 4 yard Chase-Off. Unfortunately for Tanya though, her serve deserted her a little for the next game, and with a couple of nice short chases fired by Jeremy, he was able to use them to win the next game and 2nd set 6/4.

1 set all, the 3rd set decider. Jeremy continued with the form that won him the 2nd set, and soon had a good 4 games to 2 lead. I’m not quite sure what happened next – did Jeremy relax a little, or did Tanya give herself a stern talking to, but Tanya came back with vengeance, winning the next game 3/4, and the next to level up again at 4 games all, but then went on to win the next game to be 5 games to 4 up – back in the lead. The pressure was certainly back on Jeremy, but he steadied, regained the serve, played a very tight next game to level again at 5 games all.

2 sets all, 5 games all – what an excellent Grand-Final. It must be noted here that Jeremy would appear to be a tight game specialist, only just beating Tim Lamont to get through to the grand-final, winning the last point, with the score at 5 games all advantage all in the 3rd set. Unfortunately for Tanya, Jeremy had the serve, and he simply slowed down and served down 4 good main-wall penthouse serves, those which Tanya returned had no force to trouble Jeremy, who returned well to lead the final game 40/30. Jeremy’s next serve wasn’t good, coming off the back penthouse, was this Tanya’s chance? Tanya did return it with good force, but Jeremy returned strongly out of Tanya’s reach, to claim the game, 3rd set and match – 2/6, 6/4, 6/5 …. Congratulations Jeremy, thanks for a great match guys. 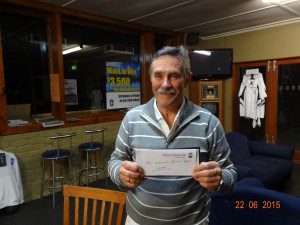