BTC’s current Doubles Pennant drew to a close this week with the season’s two top teams battling it out for overall honours. BTC’s social committee had a pizza night in store for those that came along to check out the action – so the stage was set for an enjoyable night.

Stuart Strange & Rob Lagerberg have had some success as a doubles pair over recent years and after finishing on top of the table at the end of the round robin series were sure to be favourites heading into the final. Their oponents, Nathan Baker & David Hay feared they would not even make the finals series – so were probably glad just to be there on the night!

However, after a close and tense battle and after the match went down to the final point of the second set, it appeared that the underdogs had overcome the odds and were our new Doubles Pennant champs! Final match score was 6/4 6/5. 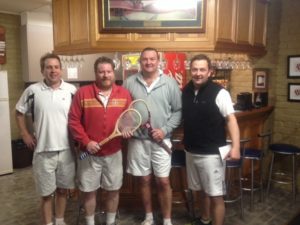 Well done David and Nathan – but a great contest was put on by our runners ups Stuart and Rob. Bring on next season everyone!!!