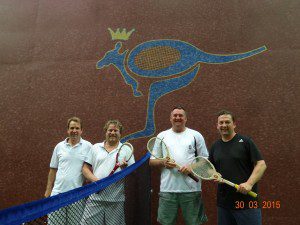 Well after a long and competitive season, BTC’s Doubles Pennant concluded this week with a terrific match between most worthy finalists.

David Hay/NathanBaker and Stuart Strange/Rob Lagerberg both battled their way through the finals play-off series and faced off in what was to be a closely fought out affair. Stuie and Rob got off to a flying start taking the first three games…but Nathan and David rallied, tightened up their shots and won the first set by the narrowest of margins 6/5. The second set continued neck and neck – but it was David and Nathan finally taking the honours and winning the match 6/5 6/4 after a stunning boast off the main wall into the winning gallery by David Hay. He even looked like he bloody meant it!!!. It was a terrific game and much easier to watch than Stuie Strange in tears at the end of it. A big congrats go to our new Doubles Pennant heros David and Nathan!

The next season will commence shortly with our two winners promising to defend their title – so contact Brett at the Club at your earliest convenience to take them on…..