It has been a big week for finals at BTC…and with a Doubles Pennant Final looming against Nathan Baker & David Hay it appeared that Greg Henderson and Bruce Christie used every bit of access to “good medical intervention” through their anaesthetic occupations to deliver themselves the edge they needed!

From the very first point the pair were firing and despite Nathan and Dave’s best efforts, Bruce and Greg hardly put a foot wrong all night. Even the not so great stuff they hit ended up being nightmaringly difficult!

Anyway, well done to all four finalists – and congratulations to Bruce and Greg on another great win. 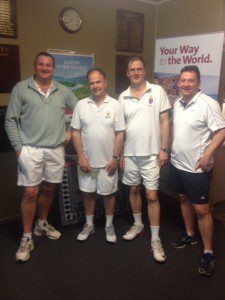