After a long and gruelling season, BTC’s A Grade Singles Pennant drew to a close recently with a Grand Final between the competitions two top place getters Nathan Baker and Stuart Strange. With the dedan filled with an equal proportion of supporters and sledgers the stage was set for a terrific battle.

It only took halfway through the first game however before Stuie started yelping like a lady in labour after tweeking his calf muscle and providing Nathan with the ascendancy he was after. First set goes to Nathan 6/2.

The match sees Stuart settle somewhat at the start of the second set, improve his serving and although he still dances around the court like an out of control drone – takes the second set 6/2.

The match is poised at one set apiece, and although Stuart puts in a gallant effort – Nathan’s consistency gets him over the line 6/2 in the final set.

Well done two both Nathan and Stuart for putting on a competitive and entertaining match – congratulations Nathan – A Grade Pennant Champion for the 2014/15 season! 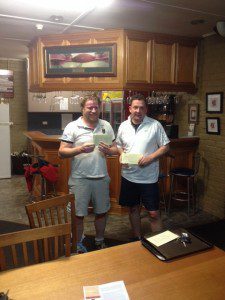