A team of 9 recently journeyed across Bass Strait to take on the Hobartians in an attempt to win The Bartlett.  Only once in the previous dozen years had the Ballarat crew managed to wrench this piece of silverware from Hobart, but with a couple of recent close finishes this team thought it had the goods to go all the way. 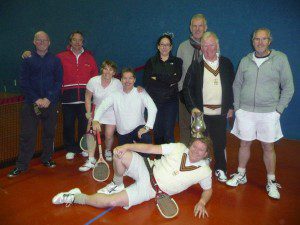 BTC's team of supreme athlete's - the best of the best!

The Team was made up of Rob Jolly, Peter Dunn, Annie Strange, Stuart Strange, Allison Dugdale, Jon Dugdale, Andrew Pipkorn, Ian Dowman and Bill Hutcheson and were ably supported by various partners.   A few of the team gathered at the club on the Friday evening for a quick hit before grabbing a meal and being tucked up in bed at a reasonable hour (yeah, right).

In the first act of sabotage, Hobart had Bill and Stu fronting up for the first match at 9am.  The guys put in a reasonable effort but couldn’t close the set out and went down 9-8.  The girls were determined to show how it should be done and put us back in the hunt with a 9-5 win.  Allison was in form getting many balls back and setting up good chases.  Jon started off his singles match well and raced to a commanding lead before Justin Legg started to get back into the match.  It went right down to the line at 8 all advantage all but alas Justin won the last point to put his team ahead. 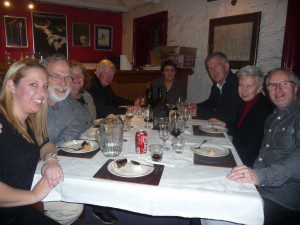 Justin then teamed with tennis nomad Hamish Oates for a match against Rob and Ian.  The Hobart guys started strongly and quickly established a large lead.  Rob and Ian left their charge a little late winning 3 quick games before Justin and Hamish closed out the set 9-5.  Time for the big guns, so we sent in Andrew and Peter.  They had a really good set with both players volleying aggressively against their opposition.  They proved too steady winning 9-6.

So at lunch on day one the competition was evenly poised at Hobart 3 sets to Ballarat 2.  Would the two 9-8 loses come back to haunt us?  We had an extended lunch break while a few amateurs took the court and we took the opportunity to make the most of the glorious Hobart weather.  Outside it was about 5 degrees with a freezing wind and the occasional shower.  We really felt like we were back in Ballarat.

After lunch Bill and Hamish fought out a bit of a slugfest with some long rests.  Hamish was retrieving really well and Bill was finding it difficult to finish off each game.  It went game for game until 6 all then Hamish got a run on of 3 quick games and it was all over, 9-6 to Hobart.  Stu and Ian really struggled to get into their next match and Hobart quickly wrapped it up 9-2.  Allison and Jon likewise were up against it and also lost 9-2.  Things were going pair shaped quickly. 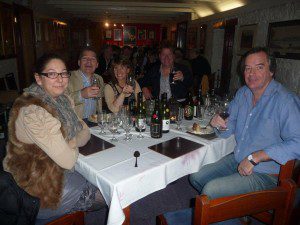 Rob and Peter then had a fantastic set against their Hobart counterparts.  The set went game for game with first one side then the other gaining the upper hand.  In the end though there was no cigar for Ballarat in another 9-8 loss.  Hobart was on a roll.  Annie was determined to get us back on track and in her match against Warwick Lee she played some great tennis.  The players were off the same handicap and as expected they were evenly matched.  Warwick managed to win a couple of quick games and in the end that proved the difference with a 9-6 win.

The last match of the day featured Andrew against Patrick Bradfield.  We wanted to finish the day on a high and it was up to Andrew to deliver.  Andrew quickly took control with aggressive hitting and didn’t look back.  He was able to win 9-3 and give us our only win for the afternoon.  So at the end of Day 1 Hobart led 8 sets to Ballart 3.

The Saturday night was enjoyed at the club with lovely catered food and of course a bit of team spirit.  Actually it wasn’t spirit but wine and beer.  We were joined at dinner by the lunch time combatants being the Melbourne Club and the Tasmania Club.  Being the party team we soon outstayed everyone else finishing up with an early night at 2am.  Only the bad weather stopped us from venturing out for an extended evening of misbehaviour.

Topped up on alcohol Annie and Ian started the next morning in a blaze of glory to give us the first win of the day 9-3.  Next up was Rob but alas he was no-where to be seen.  A quick call to his motel room found him still snoozing away, oblivious to being required on court.  Luckily he was staying nearby and 10 minutes later he was on court against Nick Rooke.  Rob had to play some great shots to finish off points as Nick was very steady, getting everything back.  Nick’s experience on the court was the difference in the end and he defeated Rip Van Winkle 9-7.

Bill and Jon needed a win to give Ballarat some chance and quickly went out to a 6-1 lead and looked to be cruising.  Their opponents had other ideas and in seemingly the blink of an eye led 7-6.  Nothing was working for the boys as they struggled to keep the ball off the penthouse.  In the end they got back in the groove and won 9-8 for Ballarat.  Stu was out for a win against Hamish and they had many great rests.  Both players played well at times and it was a matter of who would be playing the best when it mattered.  It the end it proved to be Stu and he got up in another 9-8 win.

Ballarat was starting to gain some confidence from the close wins and Allison started off her match in fine form.  She was volleying well and moving around the court well against her lower handicapped opponent.  There was no chance for Hobart to come back in this match and Allison won 9-4.  Peter was now up against one of the Hobart young guns and quick improver Graeme Blundstone.  It was experience against young legs and enthusiasm and today it was the young legs that won out with a 9-4 win.

We had made some inroads to the lead but our confidence was dented by an aggressive display from Hamish and Graham Flower who were able to account for Rob and Jon 9-3.  Andrew and Annie continued their good form, combining well against the Hobart and won 9-3 to avenge the previous loss.  Andrew had now won all three of his matches and was the form player of the Ballarat team.

With three sets to go Ballarat needed to win all three to tie the weekend and for the result to go to a count back on games won.  Ian and Bill had played many doubles matches together before and this was an advantage going into their match.  They played consistent tennis and didn’t let their opponents into the match winning 9-4.  Two matches to go.

Allison and Stu were both in form leading into this match and played to their handicaps with Stu covering the back half of the court while Allison protected the galleries.  Both players played some excellent shots with Allison again volleying well.  They were focused and went on to win 9-4. 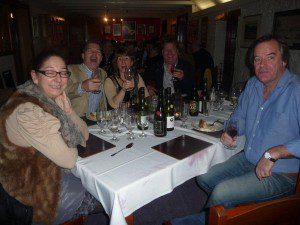 ....and things start to get very silly!!

So now it was all down to the last match.  Based on form we were in with a show with Pater and Andrew teaming up for the second time on the weekend.  Hobart had other plans however and Graham Flower and John Ramsey were going to take no prisoners.  They were focused and nothing showed this more than when Graham powered a serve into John’s thigh as he stood at the galleries and he barely flinched.  Their take no prisoner approach worked and though Peter and Andrew tried hard they went down 9-4.

So in the wrap up we got close but the silverware stays in Hobart.  Hobart will be sending a team to Ballarat (yeah this time they will) and we will be there to offer the same hospitality and beat them.  As they say, what happens on the trip stays on the trip so for those team members who sledged me over the weekend I will let you off.  Let’s just say I am reminded of that tasteful piece of artwork that Cath described to us and in particular it’s title.