BTC’s biggest annual handicap singles event – the Ballarat Open Handicap Singles, drew to a close recently with the Grand Final of the 2015 version finally getting played in early 2016! With over 50 entrants to the competition, finalists David Hay and Jeremy Johnson had already done an amazing job just to get to the final.

The start of the first set was a tight one with the first four games all going to the last point – however, Jeremy won the majority of them taking out the first set 6/1. David fought back strongly in the second set winning 6/3 and the stage was set for a close third set.

And close it was….the final set went down to 5 games all, advantage all……with  David Hay finally taking out the last point and winning the title after an epic final match! Congratulatiions go to both finalists and to David Hay – our new Ballarat Open Handicap Singles Champion!!! 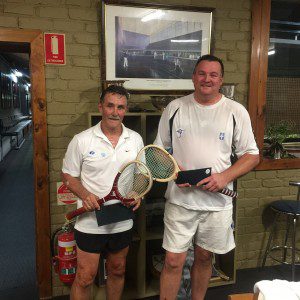