BTC’s annual Balla Rat Cat Comedy Handicap Singles was held at the Club last weekend with three round robin groups battling it out for some terrific Ballarat comedy night prizes – kindly donated by our tournament sponsor.

Group A saw some of our A Graders playing on Saturday afternoon with recently retired ex-President Rod Unmack taking out first place just ahead of Bruce Christie. 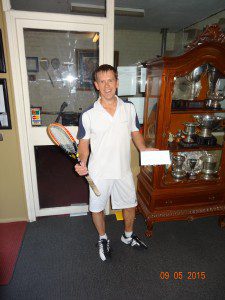 Group B had a couple of our young medicos Chengde Pham and Tim Baker back in town along with a blast from the past Ben Hoskin and tournament specialist Michele Hoskin all in Sunday morning raring to go. Ben Hoskin continued his run of good tournament form of days gone by with a good group win.

Group C consisted of newby Chris Alizzi, our Russian linguist Rob Lagerberg and Ballarat mum of the century, Tonya Roberts-Spencer who managed to organise the afternoon away from her 16 children. The new bloke on the block, Chris Alizzi took home the prizes this time though- winning by only three games over our mum of the year…

Well done to all our group winners….and once again a big thank you to our tournamant sponsor….