The carnival begins on the Saturday as the drought breaks … and by the end of the day so had Brett. On the hotel side of the court Canadian Creek breaks its banks … the Larter Street entrance becomes a reservoir … and the gutters fail as usual. Outside like King Canute in gum boots Brett battles to halt the tide … well at least to redesign the drainage system. After ruling out sandbagging the court he calls it quits after a few games and makes the popular call that they will catch up at the crack of dawn on Sunday. 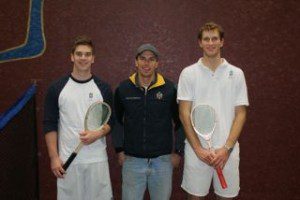 Amazingly Brett’s reengineering of the drains is a success and next day on a dry court all the matches in both tournaments are completed. In the scratch junior singles Michael Williams is at unbackable odds and comfortably wins from a gallant Sam McDonald. As usual in the handicap event it is a different story. In the first group Sam reverses the results with Michael and narrowly wins from Will Hoskin. In the second group Tom Parker wins all his matches with newcomer Will Cole a credible second. The final sees Tom take out the handicap title fairly comfortably.

Congratulations Michael and Tom on your wins. Congratulations also to Sam McDonald on two runner-up prizes. Thanks to all the competitors for competing and parents for your support. On a final note Brett says with the forecast of good spring rains he plans to plant potatoes in the mud in the storage room and supply McCains.