Does anyone know why royal tennis isn’t in the Commonwealth Games? Frankly it is humiliating that lawn bowls gets played but there’s no tennis. That old head of the Commonwealth Henry VIII played it … he’d be disappointed. It would all have been so easy … the nature of the court means the Indians could knock up any old thing and even if it fell down, it would have been just fine … we love an eccentric court design. A row of seats in the dedans would have catered for the crowd. The main risk is that Sachin Tendulkar takes the sport up and knocks off Rob Fahey. 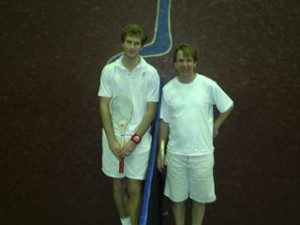 Anyway it is not to be and we have to settle for A Grade Pennant for our entertainment. Oddly enough it turned out a bit like the 100 metre sprint final … you know the fiasco where the English girl got disqualified before she started and the Australian girl got disqualified hours after winning and the African girl who then won it failed the drug test. In our case Sam McDonald & Rod Unmack are top of ladder and beat Bruce Christie & Bill Hutcheson in their semi. Stuart Strange & Robert Lagerberg finish 2nd in the season … but lose to Ross Troon & Jeremy Johnson in their semi … only to find out that their opponents can’t make the final, so they go through. Then in the final Sam McDonald hurts his back and loses to Robert Lagerberg 3/6 3/6. In the other match Rod Unmack loses to Stuart Strange also 3/6 3/6. The Doubles is not even played due to Sam’s crook back. 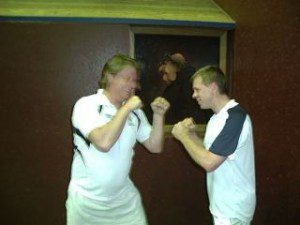 So the Strange/Lagerberg combination wins and is the new A Grade Pennant Champions. The team that loses the semi wins the final … all in all it’s a good plot for a Bollywood musical … Stuart and Robert could dance together after the win. Afterwards it’s time to celebrate with a few drinks and Grand Final pizzas courtesy of Quinton Wilkinson. There is even a good crowd to see our final… a lot more than the lawn bowls in Delhi … so take that Commonwealth Games organisers.