Yes I know it is 2010 … I can sort of read a calendar. I asked Brett if he could read one too … and he came up with this dubious explanation. Back in 2008 when the Global Financial Crisis hit … he confused austerity measures with stimulus packages and cancelled the Doubles. He now believes this was poor monetary policy. Now even Brett couldn’t sell running the 2008 and 2010 events at the same time … it’s hard enough to remember if I’m playing in the C Grade or the Masters much less the same event for two different years. So he came up with a stimulus package … a weekend round robin with the winner declared the 2008 champion.
Just like roofing insulation what could go wrong? Well the main thing is the possibility of time paradoxes … youngsters winning it who were not born in 2008 …or a member winning it who was in jail all 2008 … or more likely in rehab all 2008. Brett admits that one or more of these is more than likely. He says however in the interest of stimulus packaging we’ll have to live with it … just like dud insulation.
GROUP A
QUINTON WILKINSON & CATHY FAULL 2/20 win from BRETT McFARLANE & PAUL WILLIAMS 2/19 PHIL ROBERTS & JOHN McCLURE 1/18 JIM STEPHEN & MICHAEL WILLIWMS 1/14
GROUP B
PETER DUNN & MATTHEW DUNN 2/16 win from JO EDWARDS & ROSS TROON 1/13 ANNIE STRANGE & WILL HOSKIN O/19 BRUCE CHRISTIE & BILL HUTCHESON withdrew injured
GROUP C
ROD UNMACK & GREG ROWE 3/24 win from STUART STRANGE & MICK FENELON 2/22 GRAEME FOWLER & GREG HENDERSON 1/16 ANDREW REEVES & CORA TREVANTHAN 0/9
GROUP D
MIKE WHITEHEAD & JOHN ZULIC 3/24 win from IAN DOWMAN & ANDREW HALL 2/21 ROB JOLLY & JULIAN SUNTER 1/18 WENDY WHITEHEAD & TIM GRAHAM 0/14
The bookies struggle to frame a market as most of the field’s handicaps have been reset at their best ever levels. Logically I think we should have been using our 2008 handicaps. The humble Quinton and Cathy combination just win Group A from the fancied Pro and Prez combination. Bruce tears a calf muscle and throws Group B into disarray with the Dunn dynasty finally triumphant. Rod and Greg win all their games in Group C but Greg escapes back to Geelong … and runner-uppers Stuart and Mick advance to the semis. Mike and John win Group D from the talented Andrew Hall and his elderly pensioner sidekick.
SEMI FINALS
QUINTON WILKINSON & CATHY FAULL defeated PETER DUNN & MATT DUNN 8/3
STUART STRANGE & MICK FENELON defeated MIKE WHITEHEAD & JOHN ZULIC 8/6
FINALS
STUART STRANGE & MICK FENELON defeated QUINTON WILKINSON & CATHY FAULL 8/6 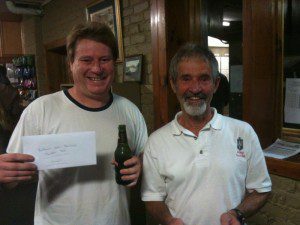 Well well … just like shonky roof insulation the runner-uppers in Group C win the Finals. Stuart Strange and Mick Fenelon are too steady in the end …well done …  you’ll probably see your names on the plaque in a few years when we play the 2010 doubles. 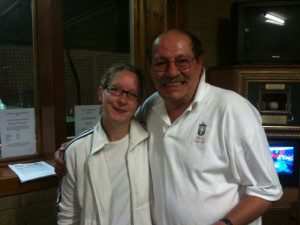