At the end of the 10 match summer season the ladder stood at:

I was bemused that only one competitor had a street name … though not that one competitor was Alastair Reed. Now “The Panther” may be ludicrously inappropriate in his case …and in fact is probably just a misprint of “The Panter” … but that’s not the point. Street names add much needed colour to the Doubles Pennant and the club encourages all future competitors to adopt one. Something inspirational or ironic would be welcome … anything to do with bodily functions less so. 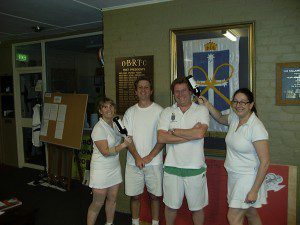 Anyway as it turned out there was very little separating the top four as they went into the 1v4 and 2v3 semi finals. After a few dramas the finals were left to Annie and Alison to fight out with Stuart and Robert. Owe 15, Rec 30, one service, banned tambour is a fearsome handicap especially at the rate the two women are improving … but Stuart Strange and Robert Lagerberg are mean competitors and ended up winning it 14 to 9 over the 50 minutes of play. Congratulations guys and in fact all the finalists.