First we had the 2008 Club Doubles earlier in 2010 and now it’s the 2009 Men’s Handicap Doubles. At first I thought it was a warp in the time-space continuum … but then I worried we had strayed into that loopy quantum mechanics stuff. You know the Heisenberg uncertainty principle … we can know the year we’re in but not exactly which tournament we’re playing … or know which tournament we’re playing but not exactly the year it’s in … but you can’t know both. 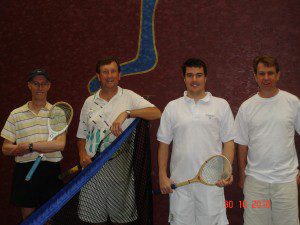 Before I could consult Ewan Barker I remembered how shameless Brett is. It’s just like the Commonwealth Bank gouging us on rates … he goes back and finds competitions that failed to happen …  and runs them as round robins years later. I believe Brett doesn’t know a jot about quantum mechanics … but he knows an opportunity when he sees it. Well good on him … I needed a bit of exercise and I was a lot younger in 2009 than I am now. 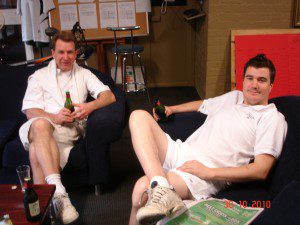 It was one of the best fields I have seen in a tournament in ages. The Friday night group A was a beauty and Ross and Stuart worked hard to take it from the Christie/Zulic pairing. In group B we saw newcomers Frank Nolan and Steve McArdel play in their first tournament. Welcome guys to a tough group that saw it all even on matches but Alistair and Robert winning on games. In Group C Jim and Dean would have seen the handicaps and blanched. This was prescient as Tim and Elliot prevail with Tim having no regard for father-in-law Dean’s feelings. The elite group is D with the best doubles pairing in our history competing with the lowest amateur handicapper in the club and his dad and then there was the very experienced Hutcheson/Jolly combination. The final Dowman/Hall pairing is not quite as elite. It all hung on the last point and at 7 all/deuce Wayne Spring served a freaky demi pique that an unlucky Bill Hutcheson could not return. 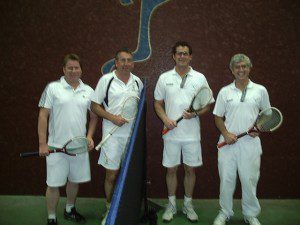 Ross and Stuart perform solidly and win the first semi but there is a lot of interest is in the second. There is a 63 handicap difference between the pairings and so we see the largest handicap possible at work. David and Wayne hog the service end and with nary a mistake take it out. The finals were always going to be close. Stuart seems to be playing every day and Ross has a formidable left hand serve. Wayne and David lead most of the way but the Troon/Strange combination surge at the end to take out the Championship. Congratulations guys. 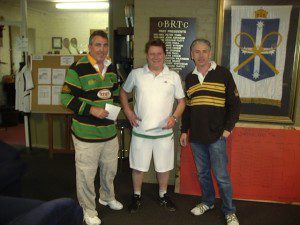 Brett is delighted that his lost competition scam is working. He is pouring over the Club records and says watch this space … for a start there is a fruitful period 1939-45 when all of the competitions were cancelled.