Last year we were scheduled to play Hobart for the Cone Cup in February and they showed up a few weeks late. This started a conspiracy theory that they were still using the Julian Calendar … and that is not as mad as it sounds. Since Julius Caesar introduced it in 45BC the calendar was effectively 11 minutes slow each year and in 1582 Pope Gregory XIII introduced changes … the Gregorian Calendar. Apart from anything else this meant winding the calendar forward 11 days. For mainly religious reasons it took centuries to be adopted around the world with Turkey only moving to it in 1926 … so it was plausible that Tasmania was still thinking about introducing it.
The calendar conspiracy theory was debunked this year when the Hobart team turned up four months late in June … not just June but on one of the coldest weeks in ages. The latest theory is that Tasmanians have evolved into a life form that only functions in cold temperatures … psychrophillic organisms like hunk Jacob and the werewolves or dreamy Edward and the vampires in the Twilight Series. They cleverly chose June to exploit their Darwinian advantage … the match results point to this as well as the fact they lost last year playing us in summer. We look forward to next year for a new more extreme conspiracy theory. 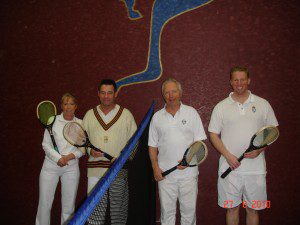 On Saturday an in-form Andrew Pipkorn teamed up with Greg and Kale for two wins while the Rob Jolly and Bill Hutcheson combination also succeeded … so a worrying 3-5 down at the end of the first day. Oh well there is always the Saturday night dinner and booze-up to exploit the home ground advantage. It was on court with Ian Chambers as master of the roast and Sheree McFarlane mistress of the salad. It was all a great success as far as anyone remembers … but the Hobart team is party-hardened and it takes more than an endless flow of red wine to slow them down.
Still first thing Sunday a sober Bruce Christie/Rod Unmack combination won both their matches and it was all even. Then … nothing, zilch, zip … the highly evolved psychrophillic pentad of Tasmanians cold-bloodedly won the next six matches … and returned the Cone Cup to their icy lair. Well done mutants … only global warming can stop them.
A big thank you from both Clubs to the Wilkinsons, Brumleys and Hartnells for providing billeting and good luck to the BTC team travelling to the icy wastes of Hobart for the return match, the Bartlett Cup, in a few weeks time.